This post covers all details about the traffic challan in India including topics like what is E Challan and how to pay online challan. So, keep reading. India is the world’s largest democracy and the second most populated country in the world with a population of 1.4 billion people. Naturally, a country this big will need a good infrastructure for transport and here comes the role of personal or public vehicles. India has more than 18.9 crore vehicles. So, in order to maintain a healthy transport system, there are some road rules in the Indian constitution that all citizens should obey for their own safety. These road rules came into effect in July 1989 and Known by name, ‘Rules of the Road Regulation’ under the Indian Motor Vehicle Act 1988. These rules applied to all citizens and vehicle drivers to maintain a systematic traffic system for the safety of the people. Any traffic violation of these road rules or traffic rules will lead to penalty and severe punishment as traffic challan in India . This traffic E challan will be the prime discussion subject of this article.

As previously stated, any violation of traffic rules can result in a traffic challan in India and subsequent traffic fines. If a person fails to appear in court by the due date, the government will issue a warrant against him or her, which could result in the person’s arrest as well as additional penalties or a traffic challan.

How to get Vehicle ownership transfer

What is E Challan?

E challan is the modern CCTV enabled auto-generated challan system to reduce the number of road accidents in India. In the process of E challan, a constantly recording CCTV camera is used and the footage is stored online. Now if any vehicle driver breaks any traffic rule, the offence will be recorded in CCTV footage. Later the traffic police or concerned authority extract the Plate number of the vehicle from the footage. After that, the offence and vehicle details will be registered in their records.

The traffic police will then contact the relevant Regional Transport Office (RTO) to obtain additional information about the vehicle, such as the owner’s name and address, the vehicle’s model, and any previous challan due records. As soon as they have the information, they will send an SMS to the owner’s registered phone number detailing the naming offence, including the date, location, and time of the offence.

How to Pay E Challan?

There are two ways you can pay your E challan. They are:

You can pay e pay online traffic challan as follows: 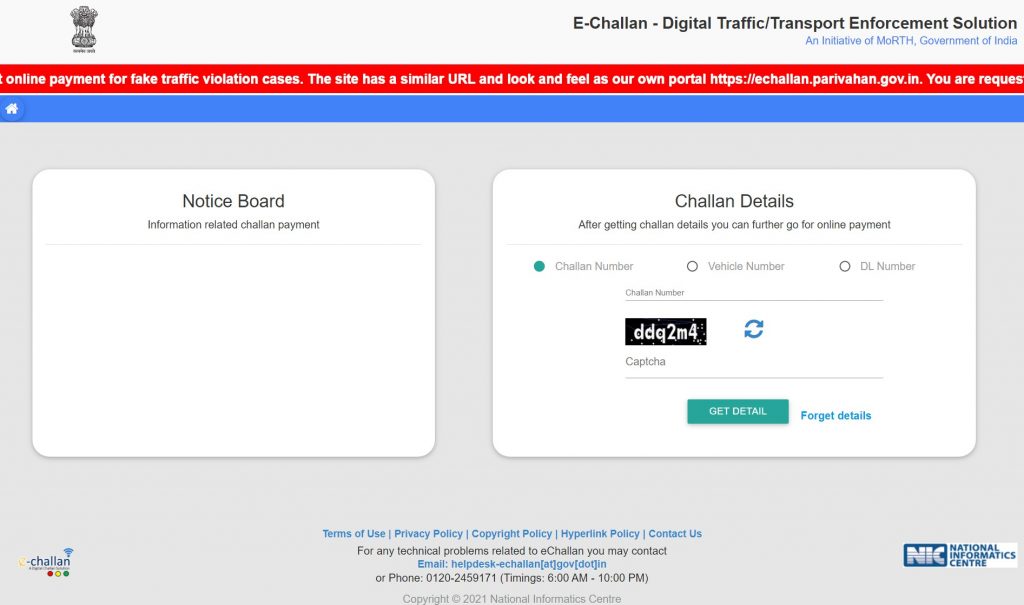 If you want to pay e challan offline, visit your nearest police station and make the payment against your unique e challan number.

To check your traffic challan online, you have to follow these steps:

Types of Traffic Challan in India:

There are different types of traffic challan in India depending on the offence, vehicle and the situation. I am listing those below.

Traffic Challan due to absence of document or other offences related to Documents:

Traffic Challan due to violation of driving rules:

Traffic Challan Due to Violation of Road Marking:

Traffic Challan to Improper Use of Vehicle Features:

Traffic Police Challan or Challan Due to Misconduct

Traffic Challan Due to not Obeying Traffic Signal:

Traffic Challan due to Offences Related to Driving:

Challan Due to Towing of Automobiles:

Traffic Challan Due to Pollution Caused by Vehicle:

Also read: How to apply for Duplicate RC

Traffic Challan due to Wrong Parking or Parking Challan

Traffic Challan Due to Offences committed by the authorities:

If this article helped you, comment down below and don’t forget to share. You can also visit our Youtube Channel here. Thank you for visiting ITZEAZY, have a nice day.