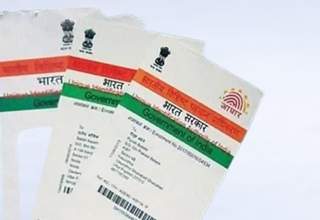 An Aadhar number is a 12-digit alphanumeric number. It is a unique number issued to citizens of India based on their demographic and personal details. Aadhar card is issued to all citizens as identity proof and has become mandatory now to avail of Government subsidies and services. The Aadhar system was launched in September 2010. It is valid for a lifetime. The Aadhar Act of 2016 states that Aadhar is the right of every citizen. You can obtain it by submitting your personal and demographic details at the Aadhar Seva Kendra or applying for it yourself at UIDAI. The Aadhar card contains the following details of an individual:-

Aadhaar serves to eliminate fake identities under various schemes which leads to significant savings for the government's exchequers. It also provides the Indian government with exact details of the beneficiaries and enables them to carry out direct benefit transfer (DBT) programmes. Aadhaar authentication enables the enforcing organizations to verify the identities of the beneficiaries at the time of service/benefits delivery and also ensures the targeted delivery of services/subsidies to them.

You can get Aadhar card in following forms

The Unique Identification Authority of India (UIDAI) has brought out four different forms of Aadhaar for the convenience of the residents of India. They are as follows: -

Aadhar Letter: An Aadhar letter is a paper-based laminated letter with a secure QR Code. It has its Issue Date and Print Date on the letter along with the other aadhar details. An Aadhaar letter is delivered to an individual free of cost by ordinary post.

e Aadhar: e Aadhar is the electronic form of the Aadhaar Letter. It is digitally signed by UIDAI and has a secure QR code for offline verification with Issue Date and Download Date. E-aadhar is also password protected and masked.

m Aadhar: mAadhar is the official mobile app made by UIDAI which can be installed on a smartphone. mAadhar app is available on Google play store/iOS. It provides an interface for those with valid Aadhaar numbers to carry their Aadhar card details as registered with CIDR.

Aadhar PVC Card: Aadhaar PVC Card is the latest version of Aadhaar launched by UIDAI. It is easy to carry and durable and has a digitally signed Aadhaar secure QR code with photograph and demographic details with many security features.

Who can apply for an Aadhar card?

An Aadhar card has several benefits. They are as follows:-