What is the difference between visa and passport How to track UK visa application Wondering what is the difference between visa and  passport? What is visa and passport? In this article we will talk about the passport and visa difference

People who go overseas commonly come across the terms ‘passport’ and ‘visa.’ Make sure you understand the differences between a visa and a passport before you travel.

The significant difference between visa and passport is that

What is the difference between visa and passport 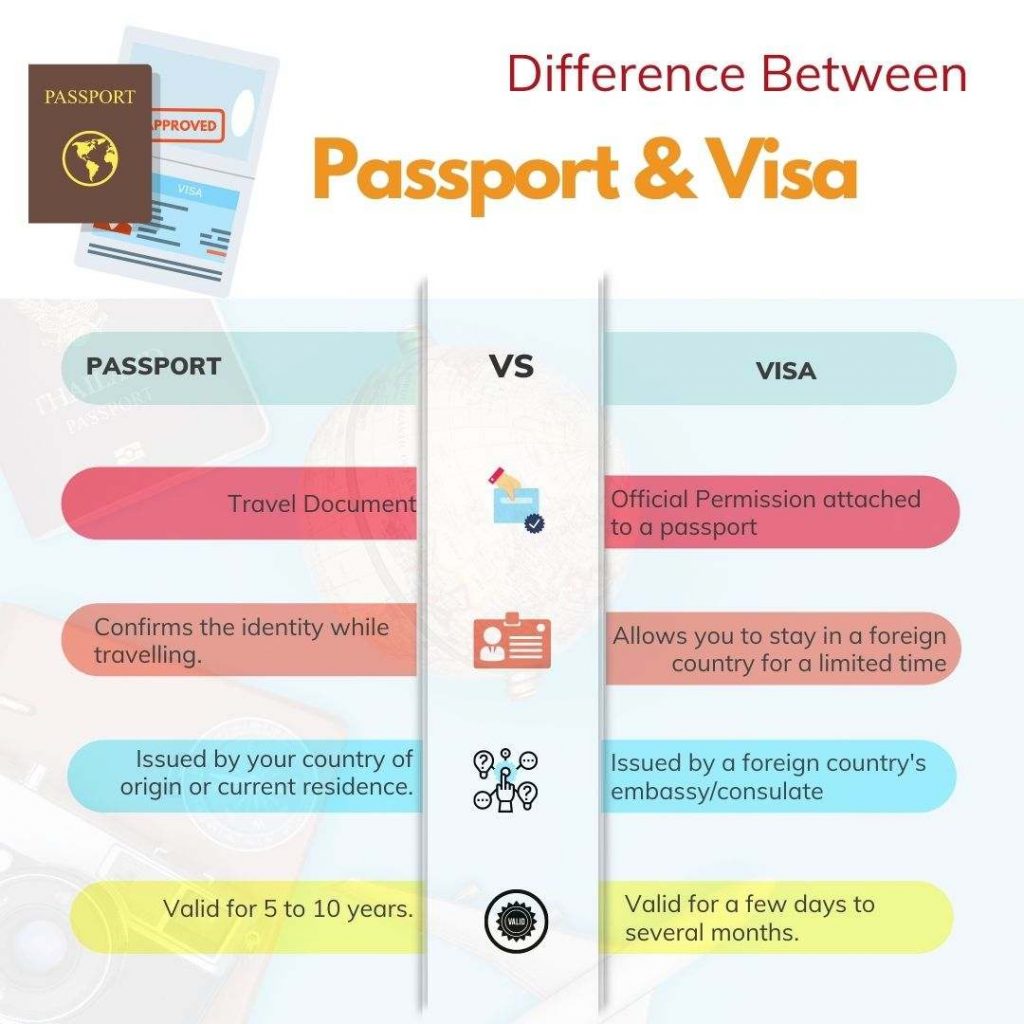 What are visa and passport

In this section, I will explain what is visa and passport one by one.

Passport is issued to a country’s citizens for international travel and personal identification during abroad travels. It is an official document issued by a national government. The purpose of the passport is to certify the identity and nationality of the owner of the passport. A passport contains personal data such as name, photograph, sex, date of birth, place of birth and nationality etc.

Passports are a form of legitimate identity, mainly because of the procedure that people must follow in order to get one. Most countries require an original birth certificate as proof of citizenship and identification. There is also a fee and a waiting period, along with other requirements. This process ensures that people applying are able to supply positive identification.

You are probably familiar with the term “passport” from the question “what is visa and passport?” Let’s take a closer look at what a visa is to see what is the difference between visa and passport.

Visa is official permission that allows us into a specific country. This permission is granted by a government official of the country we wish to visit. The visa can be a separate document but usually, it is a stamp in the passport of the traveller.

What is the purpose of a visa and passport for international travel?

When traveling between different countries, a passport is required to gain access and cross the country’s borders. The purpose of a passport is to show other nations that you are a legal citizen of your particular nation of origin. For example, if you are Indian and want to enter the United Kingdom, you must show customs your passport in the United Kingdom to prove that you are an Indian citizen before they will allow you entry.

Essentially, a passport asks other nations permission for you to cross their borders and become a part of their culture, even if it is temporary. Most passports contain your photograph, name and birth date, along with your nation of origin and a signature.

Every country has specific guidelines in terms of getting a passport. The laws are different from country to country, so it is best to find out what is required before attempting to get one. If you’re travelling somewhere that a passport is required, travel insurance is recommended in the event the passport gets lost or stolen.

Visas are another document designed to allow people access to other countries. The difference between visa and passport is: a visa specifies certain reasons why that person will be staying in the country. It also specifies a certain time frame.

Most of the time, visas are granted to people who work or plan to attend school in a nation for a fixed period of time. It is really a supplement to the passport since both are required at the same time.

The visa is usually stamped or attached to the passport and shown at the time of entry into another country. Most visas have time limits, and typically that time extends to about six months. People can request that their visa be extended in certain circumstances, but there are usually strict requirements one must meet before getting a time extension. Just like passports, a travel insurance policy is recommended in case the paperwork is misplaced.

Purpose of using visa and passport

The true reason behind visas and passports is to protect the people living in their native countries from foreigners who may be terrorists or illegal immigrants that cannot provide proof of their national origin. They have been in use for decades, and have proven to be an effective way to help keep unwanted visitors out. Passport and visa can be considered as a global identification system since they are used in just about every country in the world. Visas and Passport keep us safe and allow us to see and travel the world.

How to track UK visa application