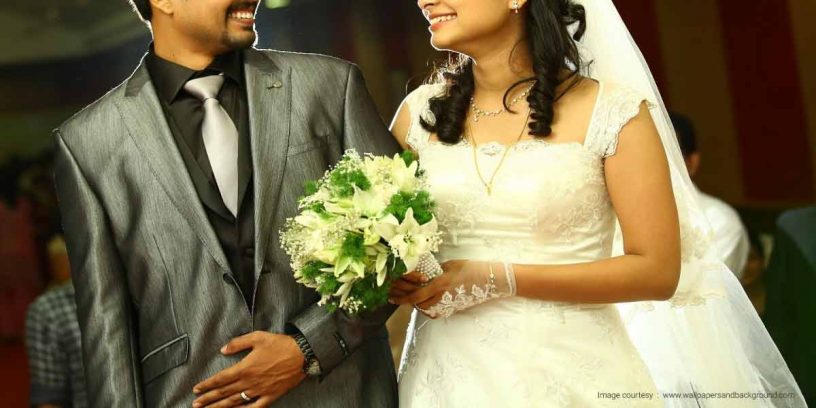 Indian Christian Marriage Act of 1872governs all Christian marriages in India. According to the Christian Marriage Act, such marriages can only be solemnized by a Minister or a Priest of a church. After the marriage, the priest may register the marriage and issue a marriage certificate, thereby endorsing the marriage. Prior to the marriage by a Priest or Minister of the Church, one also has to get enrolled in the register of the Registrar of Marriages. It is compulsory for each party involved in the marriage to make an application to the concerned authority located within its place of residence stating the purpose of their marriage in order to get a marriage registered.

NOTE: Previously, marriages could be performed without any official registration. Now the Supreme Court of India has ordered the compulsory registration of all marriages in India, irrespective of religion.

In order to constitute a valid marriage under the Indian Christian Marriage Act, it is a requirement that either one or both parties are Christians. Unless one of the parties to the marriage is governed by its own personal law forbidding such a marriage on the grounds of prohibited steps of the relationship, the marriage will be considered null and void, or redundant under the Act. To constitute a legitimate marriage under the Act, the following factors have to be fulfilled:

Conditions Required for Performance of a Marriage by a Marriage Registrar

The guidelines specified below have to be followed for the performance of the marriage by the Marriage Registrar, appointed under the Christian Marriage  Act 1872. They are as listed below:

(a)    Notice of Intended Marriage to the Registrar: A written application or notice is to be completed by either party to the marriage who are currently residing in the same area as the Marriage Registrar, in order to notify the concerned authority of their intention to get married. In the event that both the bride an groom reside in different locales, each party will have to draw up a distinct notice in writing to the Marriage Registrar located within their areas of residence, respectively. The written application is then recorded in the official Marriage Notebook and is pasted in a distinct, noticeable area in the office of the Registrar.

(b)    Making a Pledge before the Registrar: In order to acquire the Certificate of Notice, either one party to the marriage must make an appearance before the Marriage Registrar in order to pledge that:

In the event where one of the parties is a minor, the consent of one of the persons mentioned below is of utmost importance, in order to perform the marriage:

Persons authorized to perform the marriage under the act

Under Section 5 of the Act, the following persons are eligible to perform the marriage under the Christian Marriage Act 1872:

If a marriage is performed by a person who is not authorized under the act to perform it, such a marriage would be deemed null and void.

Performance of the Marriage under the Act

Time and Place for the Performance of the Marriage

The Act clearly specifies the ‘time’ and the ‘place’ for the performance of the marriage. The time for performing marriage rituals has been fixed to six in the morning and seven in the evening and the place where the marriage is to be performed is a Church. The Clergy of the Church, under special exemptions, are given the flexibility of the time and place for performing the marriage.

An application for registration of marriage is made by the parties to the concerned authority in whose Jurisdiction either party has been residing. The Registrar who was present and performed the marriage of the couple then registers the marriage in the Marriage Register. The acknowledgement slip of the registration is signed by both the parties to the marriage and by their witnesses. The slip is then attached to the register as proof that the marriage was registered. These acknowledgement slips are transferred at the end of each month to the Registrar General of Births, Deaths and Marriages. Indian Christian marriages can further be endorsed under a special provision with only a month’s prior notice, under the Special Marriage Act of 1954. This Act provides for solemnization of a marriage as well as registration by a Marriage Officer/Registrar between people of any religion such as Jewish, Hindu, Christian and so on.